Prague Castle (Pražský hrad) is one of the most visited and most important spots in the entire city; undoubtedly the jewel of the Czech capital. The Castle is an ancient symbol of Czech lands and was most likely founded around the year 880 by Prince Bořivoj. The Castle itself is like a small town, and according to the Guinness Book of World Records it is the largest coherent castle complex in the world. There are over 500 rooms, while some rooms are used as offices, representative halls, museums and exhibitions. It covers an area of 70,000 square metres and is still in use today.

The complex itself is located on the top of a hill along the left bank of the Vltava River. The Castle itself might not look like a traditional castle, because it spreads more horizontally than vertically. 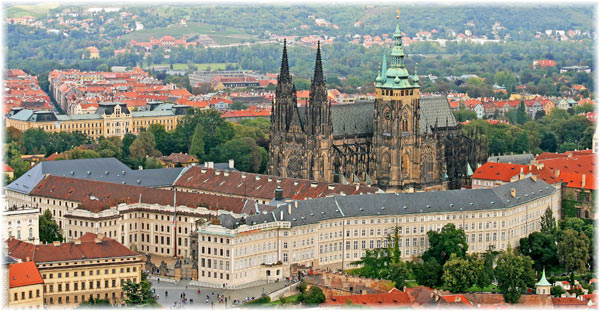 Seat of the President

Prague Castle is the seat of the President of the Republic. It is also the historical and political centre of the city and our state. Two monumental statues of battling Titans over the front gate set the mood as you enter into the vast Castle complex, which includes a palace, three churches, royal stables, a monastery and of course the manicured surrounding gardens. Supreme and towering over Prague is the magnificent and huge St Vitus Cathedral.

All around the Castle are points of interest. For example, the “Golden Lane” is a series of small shops that once served as housing for the palace guards; the Old Royal Palace with its beautiful late Gothic vaulted roof, which is one of the oldest extant parts of the Castle; the Basilica of St George; and the museum of Czech history housed in Lobkowicz Palace. Also nearby is the Daliborka Tower, named for a nobleman once imprisoned there, and the Powder Tower where alchemists once worked to try and turn metal into gold.

These used to be the stables of Emperor Rudolph II, but they are now used for exhibitions. It is one of the most highly regarded galleries in the Czech Republic and regularly shows incredibly important works of art in temporary exhibitions.

Some say that this is the most romantic place in the whole of Prague Castle. It is where the alchemists of Emperor Rudolph II used to live and work, and was also home to the world famous Franz Kafka. Nowadays the Golden Lane has retained its heritage, with a number of craftspeople plying their trade here – making it perfect for shopping.

This gallery houses the works of art owned by Emperor Rudolph II, who was renowned for being a passionate collector of art. Here you’ll find art from such famous artists as Titian, Rubens and von Aachen, as well as more than 100 other paintings (the whole collection numbers over 4,000, but not all are displayed at once). It can be found in the second courtyard of the castle.

The Powder Tower has served both as defenses and also as an alchemy room under Emperor Rudolph II. Nowadays though it houses an exhibition dedicated to the Palace Guard.

The Story of Prague Castle is an exhibition chronicling the history of both the castle and the whole of the Czech Republic. It is on the Gothic floor of the Old Royal Palace and access can be gained through the 3rd courtyard, just next to St. Vitus’ Cathedral.

Despite its name, this building has not been used as a riding school for many, many years. In fact, it is now an exhibition hall – the largest in the Czech Republic – houses a number of interesting temporary exhibitions all year round.

This is the most distant palace from the castle and was built in the 16th century by Ferdinand I, for his wife. Fans of architecture will love its beautiful Renaissance design, although you can only go inside when an exhibition is on. 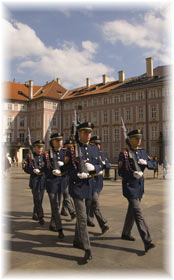 This is a ceremony that takes place at the Castle every day from 5am until 11pm. The changing of the guard at noon also includes a fanfare and a flag ceremony in the First Courtyard.

As a starting point, we recommend the Metro station Malostranská (line A), located just below Prague Castle. From there you will step up on the Old Castle Stairway (Staré zamecké schody) and directly to the Castle gate. Another recommended option is from Lesser Town Square via Nerudova Street – a bit of a steep walk too. You will end up in front of the main entrance to the Castle. This option is not suitable for less energetic seniors.

• Pohořelec – walk to the Castle through Hradčany and you will arrive at the main entrance.

Tours are available in two main forms. The long tour includes the Old Royal Palace, the exhibition entitled “The Story of Prague Castle”, St George’s Basilica, the Convent of St George, the National Gallery, Prague Castle Picture Gallery and Golden Lane with Daliborka Tower. The short tour includes the Old Royal Palace, St George’s Basilica and Golden Lane with Daliborka Tower. All tours are guided by professionals and can be heard in English, German, French, Spanish, Italian and Russian. One-hour guided tours are available daily except Monday and costs 400 CZK for up to five people, plus 100 CZK per additional person. You can also rent an audio-guide for 150 CZK for two hours from the information centres.

The castle itself dates back to the 9th century, but has been added to on several occasions.  Therefore, the castle includes several different architectural styles including a Romanesque palace built in the 12th century and a rebuilding effort led in the 14th century resulted in a Gothic style.  The early medieval castle is made of clay and stones and completed with a traditional moat.  The castle has also seen several prosperous times including during the rule of Emperor Charles IV in the middle of the 14th century.  At this time, it became an imperial residence and the seat of the ruler of the Holy Roman Empire.  Another important time in the castle’s history came in 1483 when new fortifications were made.  After a fire in the year 1541, an enlargement of the castle took place in the 16th century.  The last great building effort took place in the second half of the 18th century, however when the capital was moved to Vienna, it began to fall on hard times.  Today, reconstruction is still going on in an effort to make the entire facility open to all visitors.  In addition, the castle is now not only the seat for the head of state, it also houses the crown jewels, the relics of the Bohemian kings as well as Christian relics and important historical documents.

Prague Christmas markets start on 29 November and run daily throughout December until 1 January. Markets are usually open from 09.00 until 19.00. Major markets are located around Wenceslas Square and Old Town Square while smaller ones can be found around Havelska Trziste, Namesti Miru and Namesti Republiky.