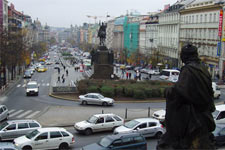 It was first laid out over 600 years ago in the Charles IV period when it was used as a horse market. Since then the square has been a regular parade ground for every kind of person, organisation or political party known in the Czech Republic. The street can, and has before, comfortably held 400,000 people. In the upper part of the boulevard the statue of St. Wenceslas on his horse can be seen. A few metres from the statue a plaque stands in memory of those who were killed during the communist period, including Jan Palach, a 20 year old student, who set fire to himself in January 1969, in protest against the Soviet invasion, four months earlier. Jan Palach died three days later with 85% burns. 800,000 people followed the funeral. Following the collapse of the communist rule in December 1989, Václav Havel and Alexander Dubček appeared on the balcony of no. 36 to greet their ecstatic supporters. Palach and other victims of the regime are commemorated in a small shrine in front of Josef Myslbek’s equestrian statue of St Wenceslas. 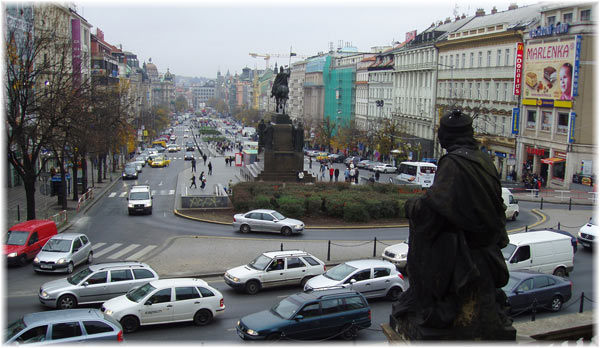 Today, Wenceslas Square is a hustle and bustle of commerce. It really comes alive after dark, when its restaurants, cinemas and nightclubs attract tourist crowds. The major historical sites are all within walking distance of the street and are worth walking step by step. At the northern end of the square you can find the Neo-Renaissance National Museum. Another significant building is Koruna Palace – a covered shopping arcade with a stunning glass dome dating from 1911.

These days, this elegant Art Nouveau café and hotel is a haven for tourists. However, from the pavement, you should still take the time to wonder at its faded grandeur. The café is an enchanting example of Prague’s Art Nouveau attractions, and of Wenceslas Square’s past grandeur. Remember to look for the colourful architecture bordering the structure – you might miss it if you do not look upwards.

Worth the entry, if only to see the museum’s marble stairway and pantheon of Czech cultural figures. The museum exhibits natural scientific and historical collections.

The Memorial of Jan Palach

During August of 1968, Russia invaded Czechoslovakia to thwart the liberalising legislation of Alexander Dubček’s ruling party (this period was called the “Prague Spring”). In 1969, on the 16th of January, college student Jan Palach chose to sacrifice his life to protest about the Russian invasion. He set himself alight and, three days later, his burns killed him. The precise spot where the protester fell has been marked with a wooden cross on the pavement. This appears to have suffered a mini earthquake underneath it. Each year, on the 16th of January, Czechs commemorate his passing.

Church of Our Lady of the Snows

Founded by Charles IV upon his coronation in 1347, this lovely church was never completed. Although it is incomplete, the church has the highest vault of all Prague’s churches (34 metres). Next to the church is the Chapel of the Pasov Virgin, a venue for temporary art exhibitions. The church can be accessed through an arch in the Austrian Cultural Institute on Jungmannovo Square, or you can get a good glimpse of the exterior from the neighbouring Franciscan Garden.

Former Czech president Václav Havel’s grandfather designed and built this immense building in 1921. It is now home to an art gallery, cinema, cafés, bars, shops and a ballroom. It has been the site of many significant events in the country’s history, and is considered the most important private cultural centre in the city.

Built in the Modernist / Art Nouveau style in 1912, the palace became home to Turkish-style baths. It is now home to Koruna Palace Shopping Centre, which hosts many luxury stores and restaurants.

A very short walk from the bustle of Wenceslas Square is the well-hidden former monastery gardens which provide much-needed peace to relax.

– At the foot of the square, during festivals and holidays, you will notice numerous stands. The stands offering food and drink are good for sampling local specialities, such as grilled sausages and spiced wines.

– Take good care of your wallet/handbag – Wenceslas square is notorious for its’ pickpockets.

– Many of the clubs and restaurants of the square are overly expensive. More affordable options are offered in the side streets nearby.