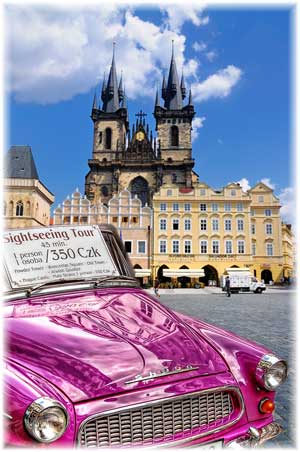 Be fascinated by Prague History. Accept our invitation for a two hours tour of Prague. From our luxurious open panoramic bus you will admire the most famous sights of the Old and the NewTown, the Prague Castle and the Jewish Quarter Josefov. The tour ends in the city centre at the Old Town Square. (2 hrs, by bus, book online)

Enjoy the night Prague from bus and boat. Would you like to be fascinated by Prague’s history and atmosphere much more than up to now? Choose this night tour to spend an enjoyable evening. First of all we will take you by bus through the Old and the New Town to the boat pier. Then our tour will continue by boat along the Vltava River. During the three hours cruise you will admire the most remarkable sights of the Old Town, the Lesser Town and the Prague Castle passing also the Charles Bridge and Vyšehrad. This river cruise includes also a music entertainment as well as a buffet dinner that will be served on the board. The tour ends at 22:00 at the pier located about 5 minutes from the city centre. (4 hrs, boat + bus, book online)

A former military town originally built by Emperor Joseph II as a part of the fortification system protection of the kingdom at the end of the 18th century. During the Second War the Nazis used Terezín as concentration camp conssisting of a Jewish ghetto and a prison for political opponents. Terezín is situated about 60 kilometers north of Prague.

The most important medieval castle built from 1348 – 1355 under Charles IV. It was to serve as a treasury for coronation jewels and state documents. It was altered in the Renaissance style in the 16th century and in Neo-gothic style at the end of the 19th century. In the Holy Cross Chapel there is a unique collection of 129 gothic desk paintings by MasterTheodoricus from 1360. The castle is situated about 40 kilometers southwest of Prague.

A medieval town situated in the beautiful countryside in southern Bohemia. The town, which is called the pearl of Bohemia, has preserved its medieval environment. The historical center of the town was listed in the World Culture Heritage of UNESCO in 1992. There are two dominant features in the town – the Castle and the Gothic church consecrated to St. Vitus. The Renaissance castle, a former seat of the powerful Rožmberk and Schwarzenberg families, is the second biggest castle in Bohemia, after the Prague Castle. It houses rich collections of antique
furniture, Flemish tapestries and historical weapons. Český Krumlov is situated about 170 km south of Prague.

Kutná Hora, www.kh.cz
During the Middle Ages Kutná Hora became the second most important town of the Kingdom of Bohemia, Moravia and Silesia after Prague, thanks to its prosperous silver mines. There are many unique Gothic monuments – namely the Church of St. Barbara (built between 1388 – 1565) – one of the most beautiful examples of Czech Gothic, Vlašský dvůr (The Italian Court) with the royal mint, where the Prague groschen used to be coined, Kamenný dům (The Stone House), the Church of St. James, etc. In nearby Sedlec, it is also possible to visit the bone—church. Kutná Hora is listed in the World Culture Heritage list of UNESCO. The town is situated 70 kilometers east of Prague.