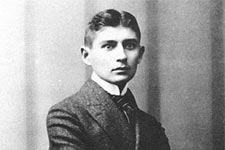 Although Franz Kafka was a Prague citizen born and bred, it was only in 2004 (i.e. eighty years after he had died) that the city paid tribute to his accomplishments by building a distinctive statue in Dušní street in the Old Town district. Kafka could speak Czech fluently but German was his native language and this was the language that he decided to write in.