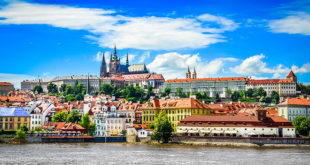 Prague Castle is one of the most visited and most important spots in the entire city; undoubtedly the jewel of the Czech capital. The Castle is an ancient symbol of Czech lands and was most likely founded around the year 880 by Prince Borivoj. The Castle itself is like a small town, and according to the Guinness Book of World Records it is the largest coherent castle complex in the world. It covers an area of 70,000 square metres and is still in use today.

END_OF_DOCUMENT_TOKEN_TO_BE_REPLACED 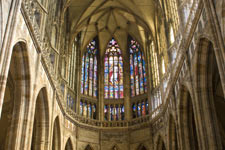 A narrow passage leads to the third courtyard of the castle, and a sudden view of the immense and awe-inspiring facade of St. Vitus Cathedral looming up just a few steps away. The cathedral can be entered through the cathedral's western door. The spires of St. Vitus Cathedral, an elegant but domineering French Gothic structure, soar above the ramparts.

END_OF_DOCUMENT_TOKEN_TO_BE_REPLACED 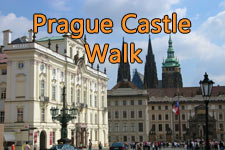 For all the UNESCO World Heritage sites peppering Prague, the city’s one defining image is the Castle. Sitting on its lofty perch high above Malá Strana, the Castle was founded in 880 by Prince Bořivoj, and is – according to the Guinness Book of World Records – the biggest in the world.

END_OF_DOCUMENT_TOKEN_TO_BE_REPLACED 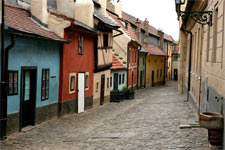 Framed by the spectacular and imposing structures of the White Tower and Dallibor Tower, Golden Lane is ticked away quietly against the walls of the castle. With a history of being home to alchemists in the 16th and 17th century, as well as those in the imperial entourage, it is now a quaint and charming little street with spectacular sights.

END_OF_DOCUMENT_TOKEN_TO_BE_REPLACED

Hradcany were, as the third town of Prague, founded at the beginning of the 14th century by a Royal Count Berka from Dube. At that time, however, there was already the Prague Castle, formerly called Royal Castle, a historical-political and cultural dominating feature of not only Hradcany and Prague, but of the whole Bohemia, influencing with its significance the whole Central Europe for centuries, whose foundation dates back sometime after 880 A.D.

END_OF_DOCUMENT_TOKEN_TO_BE_REPLACED 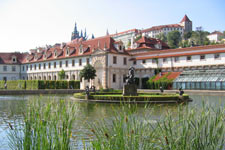 Wallenstein Palace was the first large building of the Baroque style to be constructed in Prague, and was constructed by Albrecht von Wallenstein, who died in 1634. He was a military commander who won many victories over the Protestants in the 30 Years War and he was soon seen as indispensable to Emperor Ferdinand II. The titles he received weren’t enough for him though; he had eyes for the crown of Bohemia.

END_OF_DOCUMENT_TOKEN_TO_BE_REPLACED 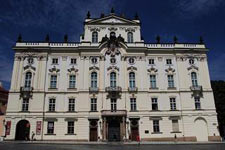 Sternberg Palace is open for the public after the reconstruction in the years 2002 and 2003. The palace houses permanent exposition of old European Baroque Art (Collection of Old Masters), for instance paintings by El Greco, Rembrandt (portrait Scholar in his Study 1634) and Rubens.

END_OF_DOCUMENT_TOKEN_TO_BE_REPLACED 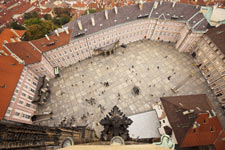 The one sight that should be on everyone’s list no matter how much or how little time you have in Prague should be Prague Castle. This building is more than just a castle, it is also a network of outer buildings and beautiful courtyards.