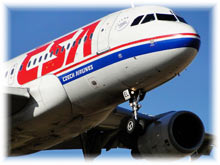 Given its location, at the heart of Europe, Prague is quickly turning into one of the continent’s central transport hubs. The renovated airport in Prague is serving connections to over fifty destinations.

The low budget airlines have now forced the main European national airlines to drop their prices making it cheaper to visit the city. And part of the reason Prague has seen a steady increase in the number of visitors is the volume of new flights to Prague that have come on the market. With many of the low budget airlines now flying to Prague, it is possible to get a flight to Prague for as little as 40 EUR.

Ryan Air – flies from London Stansted to Brno (second biggest city in the Czech Republic, 200km from Prague) from around £20 tax included, one way. Ryanair.com

AirOne – Fly from Milan, Venice and Pisa Tuscany to Prague with FlyAirOne.com

Brussels Airlines – fly from Brussels to Prague as low as 50 EUR. Brusselsairlines.com

German Wings – operates a low-cost route to Prague from Cologne Bonn in Germany. The cheapest one-way fares come to €33, including taxes. Germanwings.com

Norwegian – flies from Oslo, Stockholm, Copenhagen to Prague from as low as 50 EUR. Norwegian.no

Smart Wings – Prague based airlines fly to many EU destinations, including the Middle East. Smartwings.net

As a rule best deal are with low cost airlines but be aware that most of them are very cheap only if you book well in advance and mostly do not serve free food and drinks on the board. Low-cost airlines sell flights direct to you so you don’t pay a high-street travel agent commission. So when booking holiday check low cost airlines prices and then decide if package deal from your travel agent offer better deal then if you book flight and hotel separately.

There are three ways to travel from the airport into Prague city after your flight. You can take a taxi directly into the city centre for around 500 – 700 CZK. Make sure you set the price before you go, as Prague taxi drivers are renowned for trying to rip off their passengers. For this reason, we advise you to take a private taxi. Depending on what time you are travelling, it should take anywhere between 20 – 40 minutes.

Another way of getting to and from Prague’s Airport (Ruzyne) is by bus, which costs 32 CZK for the journey. You will find the bus (bus 119) located outside the arrivals terminal, and the service runs from 5 am until 11.30 pm. Make sure your flight to Prague arrives in time to get this service (there is also a night bus service, but it is very inconvenient and includes at least two stops/changes). The bus will take you to the Dejvicka Metro Station, and from there you can take the Metro into the city centre. You do not need to buy another ticket for this part of your trip.

If you are travelling in a group, you can book a private shuttle service waiting at the airport after your Prague flight.