Apart from accommodation prices, city centre restaurants and other tourist attractions, Prague is still quite cheap and considered a bargain destination compared to other EU countries. Though for luxury goods shopping like electrical appliances, cosmetics and fashion, prices are higher than elsewhere.

The lowest daily budget can be as low as 900 CZK if you stay at hostels, eat takeaways and use public transport. If you stay in private accommodation, eat at average restaurants but control your budget, you can get by on 2500 CZK a day. On the other hand, if you stay at top hotels, eat at top-end restaurants and use cabs you could easily spend 10.000 CZK a day. Please do not expect Prague to be extremely cheap and keep in mind that only some products and services are much cheaper here like beer, food in supermarkets, and transport remains relative bargains compared to other European capitals. 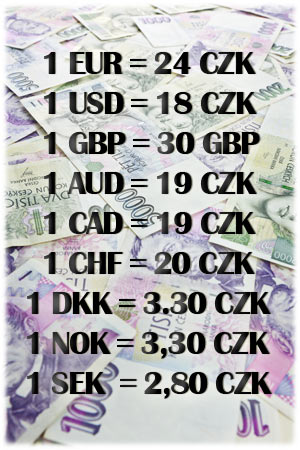 Attractive hotels range between 3500 CZK and 6000 CZK for a double room, but hotels in Prague suburbs can cost as low as 700 CZK for a single room. Staying in a hostel dormitory room for one cost on average 400 CZK but can be found for as low as 250 CZK in low season. Dinner for two with some drinks at a fancier restaurant can cost around 2000 CZK, or midrange restaurant costs from 900 to 1200 CZK. Lunch in a pub can cost about 150 CZK per person, and a special lunch menu in a cheap eatery place can cost from 60 to 100 CZK. Coffee in a city cafeteria is 45 CZK, but in Starbucks, around 100 CZK.  A beer in a pub outside the centre will cost around 25 CZK though in the heart of the city this will cost up to 80 CZK, soft drinks about 35 CZK. Cigarettes are still a bit cheaper than in other parts of the EU. A pack of Marlboro cigarettes costs 84 CZK. In supermarkets, a 0.5 L bottle of water costs 15 CZK, a loaf of bread from 20 CZK, litter of milk 20 CZK. If planning to rent a car, a litre of petrol will cost you around 32 CZK. Cinema tickets cost up to 200 CZK. One day pass for public transport is 110 CZK, taxi from airport to the city centre is from 500 to 650 CZ, and taxi within city centre should cost 180 to 250 CZK.

Admission to castles and chateaux

How to Save Money

If you want to lower your expenses, you should avoid city centre hotels, restaurants, nightclubs and shops, or ask locals where they’re going out. Visiting galleries and museums is not expensive, and some of them are admission free.

Tip: Withdrawing cash from ATMs or paying with your card is safe but can be expensive if you let the ATM or card processing operator do the conversion (choose ‘Without Conversion’ and instead pay in local currency when the question comes up).