Geographically speaking, the Czech Republic (Prague) is situated in a temperate zone, and there are four seasons of approximately all the same length. Normal weather temperatures are about zero degrees Celsius in the winter and about 25 degrees Celsius in the summer months. We recommend visiting Prague any time from March to November when you will find the Prague weather pleasant enough. 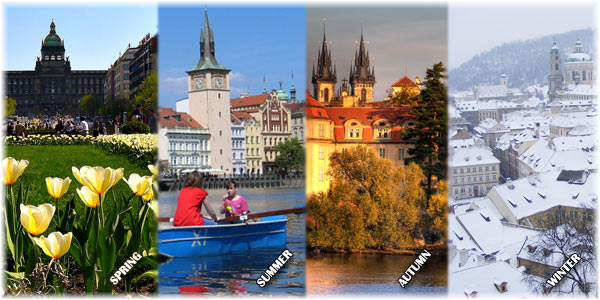 Prague has a continental weather climate with hot summers and cold winters. The weather here is affected by weather patterns from both the east – Siberia – and the west – the Atlantic. Occasionally during the summer, temperatures can reach as high as 35C, and in winter can be as cold as -15C (even to -25C). Average high temperatures from May to September are 22C, with a low of 12C, with an average of seven hours of sunshine. Spring and summer are likely to be the sunniest months, and the period between May and August is the rainiest. Snow is rare in Prague during winter. Rainfall is pretty much regular throughout the year, with just a tad more in spring and autumn and the very occasional summer thunderstorm. If you plan to visit Prague in peak summer, you must be prepared for crowded restaurants and hotels and a city full of tourists. But all seasons in Prague are beautiful, no matter what the weather is like. If you’re coming from the UK, the weather is quite similar, so there should be no big change for you. Please also note that during hot spells, the air quality in Prague can deteriorate rapidly because of pollution, causing some problems to those who suffer from respiratory problems. If you have asthma, you should carry an inhaler at all times.

Prague’s gets lots of rain each year. The months with the most rain are November and October, but there are numerous light showers during the summer also. Snowfall in winter can be quite intense, but it is not severe very often.

Summer comes with warm climates, regular, often intense, showers and 1000’s of tourists. ‘Ibis is a bustling and picturesque period to visit. Each weekend, Czechs go off to the countryside to go trekking in the many hills or remain in their rural cottages. Czechs staying in Prague go to the lakes and reservoirs on the city’s outskirts, attempting to get away from the heat. There’s loads of entertainment provided as city culture comes out into the public spaces featuring in the streets,  gardens and squares. Street buskers, classical orchestras and performers all assist in keeping tourists amused. Lots of cafés offer tables outside so you can enjoy your refreshments whilst observing the entertainment.

Once the gardens under Prague’s Castle begin to display gold and red shades and tourists begin to depart, Prague prepares itself for the colder months of winter. This also is the usual season for gathering mushrooms where you witness people holding baskets stuffed with newly collected mushrooms. The market stalls are packed with vegetables and fruit. The tree-bordered slopes over the Vltava transform into the beautiful shades of autumn. October and September still offer a reasonable quantity of sunny and warm days, though November usually witnesses the 1st snowfall. Fans of soccer pack into the stadiums, and Pardubice’s renowned steeple-chase course tremors to chants from the fans.

Prague weather for New Year can be very cold, but it is a really popular destination to ring in the New Year and gets very crowded.

Prague’s spring witnesses a colourful eruption in the city as the gardens begin to blossom and the city livens up. A raft of blooms, cultural events and colours make this among the more interesting periods of a year to see the city. The city’s blooming gardens and parks are accessible again, following winter’s cold months. Throughout April, the temperature goes up, and entertainment programmes start – revolving around Prague’s Music Festival of the Spring. Red is commonly worn in spring and symbolises joy, health, happiness and new life.