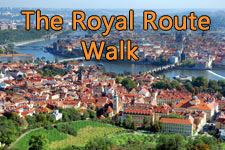 Between the 15th and 19th centuries, Czech monarchs on their way to coronation would process along what is known at the Royal Route. Over the years this trail – which leads from the Royal Court up to the heights of Prague Castle – was processed by sundry Leopolds, Ferdinands, Charleses, Josephs, and Albert II of Habsburg, who was the first, back in 1438. Although the Royal Route itself is ancient, its moniker may have been acquired as late as 1955, following the reconstruction of many of the buildings that line it.

END_OF_DOCUMENT_TOKEN_TO_BE_REPLACED

Vyšehrad offers visitors to Prague a pleasant, relaxed walk lasting about two to three hours. Even though it is situated close to the city centre, you will be in quiet surroundings out of traffic. Due to its position on a higher rock just above the Vltava river, it offers beautiful panoramic views over part of Prague.