Vyšehrad offers visitors to Prague a pleasant, relaxed walk lasting about two to three hours. Even though it is situated close to the city centre, you will be in quiet surroundings out of traffic. Due to its position on a higher rock just above the Vltava river, it offers beautiful panoramic views over part of Prague.

Vyšehrad, sometimes referred to as ‘Prague’s second castle’, is another of the Czech Republic’s fine castles and was built in the 10th century on a hill over the Vltava river. Situated within the castle is the Church of St. Paul and St. Peter, as well as Vyšehrad Cemetery, containing the remains of many famous people from Czech history.

1. From the terrace in front of the Palace of Culture, we look out over the roofs of the houses in the Nusle Valley. Behind them rises the upper part of the Nové Město (New Town). We can clearly see its mediaeval stone fortifications, originally stretching as far as Vyšehrad and a part of the Baroque brick fortifications. Above the valley, two new town churches dominate the view – on the right, the Church of the Virgin Mary in Karlov, and on the left, the Church of St Apollinaire.

2. Via the street Na Bučance we approach the huge, brick fortification of Vyšehrad. However, this is not yet the actual fortress, but the protruding fortifications. (Vyšehrad stands with steep cliffs on three sides. Only where we are standing is the ground flat, requiring the fortress to be protected in the west by double walls.) We go through the Táborská Brána (Tabor Gate) to enter the street V pevnosti, a narrow headland where any attackers would present a good target. We reach the remains of the Gothic gate from the time of Charles IV – it was called “špička” (sharp point) and was one of the most flamboyant gates. A smaller copy stands in Petřín, where it houses the mirror maze. The Gothic wall stretches away from the gate, and visible is the entrance to the fortress casemate built by the French in 1742. Finally, we walk up to the main fortifications of Vyšehrad, which open out into a star-like formation on both sides of the path. The crossfire of the defenders easily covered thanks to this system, any attackers on this narrow pathway.

3. Behind the ostentatious Leopold’s Gate, built in 1670, stands the Romanesque rotunda of St Martin, the oldest remaining building in Vyšehrad. It originates from the time of King Vratislav II after 1070. In the 15th century, the rotunda stood in the centre of the town of Vyšehrad. In its vicinity was the main market with a town hall. After the foundation of the Vyšehrad fortress, it was used as a powder store and later as a storeroom. It was renovated in 1878. From the mound above the rotunda is an interesting view over Prague with the New Town in front. However, we will turn left via the street K Rotundě. On the left stands the neo-Gothic building of Nového děkanství (the New Deanery) [No. 1100/10], decorated with the emblem of the Vyšehrad capitulary – crossed keys.

4. On the right side of the path, we notice three fragments of a huge pillar built into a pyramid shape. Possibly it could be a time-measuring pillar from long ago and perhaps even marked a pagan cult site. It is called the Čertův sloup (the Devil’s Pillar), and the following story is told about it: one of the Vyšehrad canons succumbed to gambling. To pay his debts, he made a bet with a devil called Zardan that he would finish saying the holy mass before the devil could bring Vyšehrad a pillar from the church of St Peter and St Paul in Rome. The devil, of course, cheated and grabbed a pillar from a nearer church – the Santa Maria in Trastevere (in whose colonnade, to this day, one pillar is missing). On account of that, St Peter knocked him into the sea a few times so that Zardan reached the church exactly as the mass was ending. Angrily he threw the pillar onto the roof of the church of St Peter and St Paul until it fell through into the nave, where it remained for a long time. The truth of the legend was tenaciously defended. In 1861 the Vysehrad Provost wrote these unequivocal words: “the devil brought the pillar from Rome, and it is not possible to speak or believe otherwise. Zardan, who carried it, had to know it better than anyone.”

5. At the crossroads by the granite slab with a carved plan of the Vyšehrad fortress, we turn left to the place where once stood the Romanesque basilica of St Vavřinec (St Lawrence) built in the second half of the 11th century. It was damaged in the Hussite Wars, and later the house of the Staré děkanství (the Old Deanery) [No. 14/1] was built on its site. Also, here used to be Boleslav’s mint. The foundations of the basilica are open to the public.

6. We continue further as far as the earthwork fortifications. This time a view opens up of other parts of Prague – Pankrác, Michle and Podolí. In the distance, we can see the huge building of the Television Centre in Kavčí hory. According to legend, it was from that exact spot that the strong man Bivoj carried the malevolent wild boar all the way to Vyšehrad.

7. We now reach the viewing terrace above the Vltava, which affords a lengthy view along the river valley. Here we stand where legend has it that the brave Horymír jumped with his horse Šemík into the Vltava.

8. The huge Vyšehrad cliff above the river has for a long time given rise to a legend similar to the one about Blaník, where sleeping knights await the time when the Czech nation needs them most. On the rock are the remains of a Gothic guard tower called Libuše’s bath. The Prague Germans, to undermine the dignity of Princess Libuše, promoted the legend that she bathed here with her lovers and afterwards hurled them down the cliff.

9. We go down from the terrace to the place where the princely and royal palace used to stand. On the left side is a wooden well with a windlass, to which in 1140 was led the oldest Prague water main. It emerged from a 4 km distant well called Jezerka in Michle. We walk around the park gardens with Myslbek’s statues created on themes from old Czech legends. There are double statues of Lumír and Song, Ctirad and Šárka, Záboj and Slavoj, and Přemysl and Libuše. They, first of all, stood on the Palacký Bridge but were damaged by a bombardment in February 1945 and afterwards were transferred to Vyšehrad by mistake.

10. Church of St Peter and St Paul. We stand in front of the capitulary church of St Peter and St Paul (Kostel sv. Petra a Pavla). Originally a Romanesque church, it has been rebuilt many times in the last century by Josef Mocker and František Mikš in the neo-Gothic style. Inside the church is the Romanesque stone tomb of St Longin and a fine mediaeval painting of the Virgin Mary Dešťová (The Virgin Mary of the Rains) from after 1350. On the left of the church, we can visit the legendary Vyšehrad cemetery, founded in 1860 on the initiative of the Vyšehrad Provost Václav Štulc. Today in the cemetery are buried over 600 prominent personalities of the Czech nation. After viewing it, we can walk around the cemetery wall into Štulcovy Sady (the Štulc Gardens), adorned with a Baroque equestrian statue of St Wenceslas by Jan Jiří Bendl, which first stood in St Wenceslas Square, and was transferred to Vyšehrad in 1879.

11. From the statue of St Wenceslas, we descend to the Brick or Chotkova Brána (Chotek Gate), built between 1841 and 1842 in neo-classical style. Here we take our leave of Vyšehrad.

How to Get to Vyšehrad?

It is easily and quickly reachable from the centre by metro line ‘C’ to station ‘Vyšehrad’ (two stations from the National Museum). From there, it is about a 10-minute walk to Vyšehrad’s main gate. The tour of the complex takes about 2 or 3 hours. 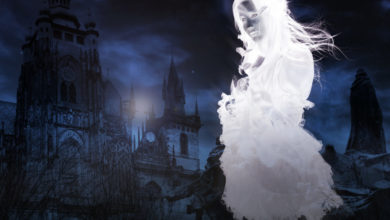 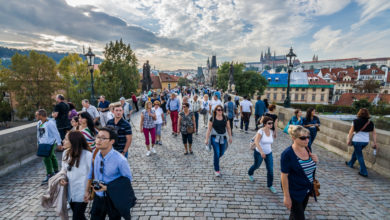 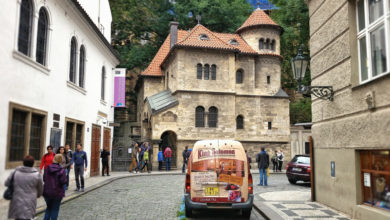