Tour starts at the Rudolfinum and ends at the Old Town Square.

From as early as the 10th century, Jews began to settle in Prague. By 1254, following a series of devastating pogroms, the minority group found themselves rounded up and confined to the small ghetto of Josefov. They were not allowed out until 1848. Josefov continued to be a stage for brutal anti-Semitic uprisings through the ages, not least the 1389 Easter Sunday massacre in which 1,500 Jews were murdered.

Once a close-knit hodgepodge of twisted streets and crooked buildings, much of the old Jewish Quarter tells a different story today. It is no coincidence that the designer label-heavy street of Pařížská has the name it does; between 1893 and 1913, much of Josefov’s ancient quarter was demolished in order for the streets to be reconstructed in a way that mirrored the French capital.

That is not to say that Josefov’s pre-19th century history has been entirely wiped from the surface. Indeed, it is home to the Old Jewish Cemetery, Europe’s oldest Jewish burial ground. There are also several ancient synagogues in the vicinity, not to mention a few remaining lamp-lit passageways and lanes. These often fall silent at dusk, and as you walk through them, you can almost imagine running into the spectre of Franz Kafka or monstrous Jewish folklore legend the Golem.

1. Home to the Czech Philharmonic Orchestra, the Rudolfinum was completed in 1884 and named in honour of Rudolf, Crown Prince of Austria. Aside from its lavish Dvořák Hall – famed for its fine acoustics – the Rudolfinum is also notable for the figures of famous composers which stand atop its roof. There is a famous Czech novella entitled Mendelssohn is on the Roof, which tells the story of two Czech workmen ordered by the Nazis to remove a statue of Jewish composer Felix Mendelssohn. In error, they pull down down that of Hitler’s idol, Richard Wagner. The reason? He has the biggest nose.

2. With the Rudolfinum to your left and the Vltava behind you, cross Križnovická (in the short amount of time the green man allows you) and enter Josefov on Široká. On your left now are the walls of the Old Jewish Cemetery. If you decide you don’t have time for a proper tour, make sure you get a peek through one of the gaps in this wall to look at its cluttered, crumbling gravestones. Because of space restraints in this tiny allotment of land, some bodies in here are buried twelve-deep.

3.Continuing along Široká, you’ll come to the Pinkas Synagogue, inside which is ‘Memorial 77,297’ – designed and engraved by Václav Boštík and Jiří John in tribute of all the Jewish Holocaust victims from Bohemia and Moravia. The Pinkas Synagogue is also one of the outlets where you can purchase tickets for access to the rest of the old sites and museums of Josefov. However, the entrance fee is rather steep, and you may decide your money could be better spent later on a few Pilsners.

4. A left turn out of the Pinkas Synagogue will take you to the end of Široká and onto Maiselova, where is to be found Maisel Synagogue. This was the building in which Hitler intended to house his sick museum dedicated to an extinct race of Jews. But, of course, this never happened, and today it serves as a Jewish museum of infinitely more tasteful means. The synagogue has been rebuilt twice – once following a fire in 1689 and again in 1893. Now continue another three blocks along Široká.

5. Owing to its Moorish style, you would be forgiven for thinking the Spanish Synagogue was actually a mosque. The interior of the building is something to behold, its pièce de résistance being the almighty gilded dome. František Škroup – composer of the Czech national anthem – was the organist here during the mid-19th century. The Franz Kafka statue outside (executed in a very Kafkaesque style) could easily be mistaken for the work of Czech rebel artists David Černý. In fact, it is by another native sculptor, Jaroslav Róna. It is alleged to represent a dream that Kafka once had, although Róna has never spoken up about its meaning. Kafka is, of course, one of Prague’s great literary heroes, and he owes this to his friend Max Brod, who ignored Kafka’s request for him to burn all of his manuscripts following his death.

6. Head north out of the square along Dušni, where you’ll soon catch sight of St Simon and St Jude Church, which was built between 1615-20 by the Bohemia Brethren. It is said that the church organ, built in 1724 by Andreas Wambesser, was played by both Wolfgang Amadeus Mozart and Joseph Haydn. Along with the church used to be a hospital as well as Prague’s first anatomy lecture hall. If, by this time, you’re looking for somewhere to wet your whistle and have a bite to eat, try the excellent Hispanic-themed La Casa Blů, which you will find by veering right onto Bilkova.

7. If, however, you have the strength to carry on immediately, turn right out of St Simon and St Jude Church, and walk directly north up Dušni until you reach the river. Spanning the Vltava over to your left is the Čechův Bridge – an early 20th-century construction built from iron and stone and named after the writer Svatopluk Čech. The Bridge’s standout features are the Art Nouveau angels guarding it at each end. Across the river, you will see Letná Park – a haven for beer guzzlers and skaters in the summer and also home to the bright red metronome, which sways away endless time at the crest of the plateau. It replaces what stood there before it until 1962 – a gargantuan piece of Stalinist propaganda, which was eventually blown up using 800 kilos of dynamite. You can see the video online. In 1996, Michael Jackson used the area to erect a huge statue of himself, advertising his European tour.

8. Turn left off Dvořáko and take a stroll down Pařižká. As mentioned before, this street is home to most of the designer outlets, and you’ll need a healthy wallet if you’re after a new coat or necklace. Off to your right, you will spot the Old New Synagogue, the attic of which, as legend has it, is home to the Golem, a monster created by Rabbi Loew out of clay, to protect inhabitants of the Jewish Ghetto from anti-Semitic attacks. Food at the grey-yet-regal-looking Old Synagogue Restaurant is worth splashing out on if you’re feeling particularly plush.

9. Once you’ve walked the length of Pařižká, you will find yourself in Prague’s Old Town Square. Directly in front of you is the Old Town Hall. If the space filled with trees looks slightly out of place to you, you’re not wrong. Here used to stand the rest of the Town Hall until it was razed to the ground by the Nazis at the end of World War Two. All that’s left of the building now is its tower, on one side of which is to be found the Astronomical Clock.

10. To your immediate right is St Nicholas Church, considered to be a fine example of Baroque architecture. Until 1901, however, most of the church wasn’t visible, as another building covered it, Krenn House. The interior of St Nicolas is a sumptuous affair, inspired by Paris’ chapel of St. Louis-des-Invalides. Though originally a Catholic place of worship, the Church was later taken over by the Hussites. Following brief terms as a Russian Orthodox church and a storage warehouse, they returned to Hussite hands, remaining in their possession today.

This tour can be walked on your own (self-guided tour), or we can arrange for you a professional English-speaking guide. The tour guide can even tailor this walk to your special needs. For example, recommend a place to stop for lunch, including a river cruise or tram ride if you are tired walking, etc. The guide can pick you up at your hotel, or you can arrange to meet anywhere in the city. Please email us your details for a price quote. 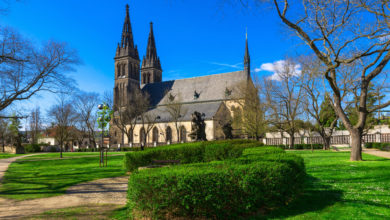 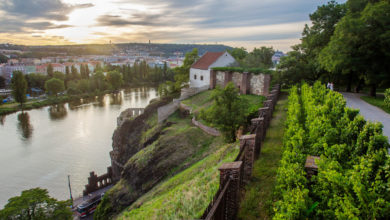 Along the Vltava to Vyšehrad