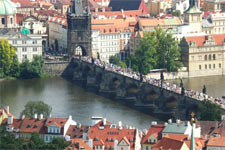 The 13th-century Charles Bridge (Karlův most) lined with half a kilometre of Baroque statues ranks among the most popular tourist attractions in the city. Strolling this charming bridge with impressive vistas over Prague Castle and the Vltava River is everybody’s favourite activity. Unfortunately Charles Bridge is a victim of its own popularity – most of the time it is packed with tourists and Czechs alike, especially during the spring and summer months. To avoid crowds and snapshotting tourists blocking stunning views, you have to either wake up early or come late. To experience the bridge with its most romantic, quiet atmosphere, morning is the best time to enjoy a less crowded walk, or to take a leisurely stroll across the bridge with the impressively lit streets of Prague in the background at late evening. 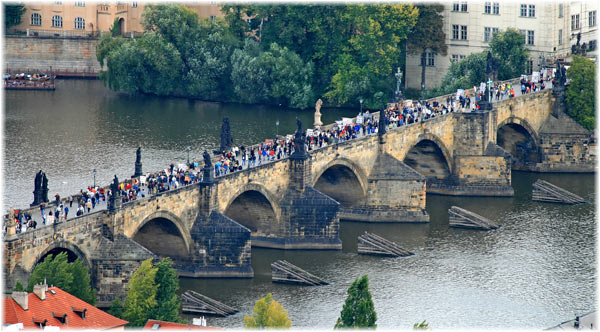 From 9am till late, expect souvenir stands and postcard sellers, as well as an endless variety of street musicians playing their hearts out for you as you stroll across. You can even have your portrait drawn by caricaturists, which makes a nice souvenir to bring back home.

The famous Charles Bridge crosses the Vltava River in Prague. This ‘solid-land’ connection made Prague important as a trade route between east and west Europe. The bridge was originally called the Stone Bridge or the Prague Bridge but has been the “Charles Bridge” since 1870.

King Charles IV’s favourite architect and builder, Peter Parler, originally built the present-day bridge. The initial idea was to build a functional construction for jousting tournaments, and for many years the only decoration on the bridge was a simple crucifix. Later, however, the desire of the Catholics for ornamentation resulted in 30 statues being built (1600 to 1800 AD).

Today most of the statues are copies, due to damage caused by various floods and catastrophes over the centuries. The oldest sculpture here is the Crucifix (1657), near the Old Town end. The gilded Hebrew inscription, reading ‘Holy, holy, holy, the Lord of Hosts’ was funded in 1694 by the fine of a local Jew, Elias Backoffen. Perhaps the most interesting statue, and oldest, is that of John Nepomuk (eighth from the right as you cross towards the castle). Legend says that if you rub the bronze plaque at the base of the statue, you will be sure to return one day to Prague, and countless tourists’ palms have given the panel a bright golden sheen.

In 1683 the Jesuits placed a statue of John of Nepomuk on Charles Bridge as part of a campaign to create a Bohemian Catholic martyr. The real Jan of Pomuk had been an ambitious vicar who was killed in 1393 in the power struggles between King Vaclav IV and his archbishop. The Jesuits devised a more saintly tale, claiming he died for refusing to divulge the queen’s confession, and that when he was thrown from Charles Bridge, five stars appeared where he drowned. When his body was exhumed in 1719 his tongue, which became his saintly attribute, was found miraculously pink and fresh. He was made a saint in 1729 and his statue can be found on bridges throughout central Europe.

The Bridge, which is 516 metres long, contains 16 pillars and three bridge towers. At the eastern end of Charles Bridge is the late-14th-century Old Town Bridge Tower designed by Peter Parler, built as a fortification and also as a triumphal arch marking the entrance to the Old Town. The Old Town Bridge Tower, is considered to be the most beautiful bridge tower in Europe due to its rich sculptural decoration. The tower is open to visitors and commands incredible views from the rooftops, best appreciated in the early dawn light. Admission: adult 75 CZK, child 55 CZK. Open: 10am-11pm Apr-Sep, to 10pm Mar & Oct, to 8pm Nov-Feb. www.prazskeveze.cz.

At the Lesser Townside of the Charles Bridge is another tower. The Taller Lesser Town Bridge Tower is open to the public and houses an exhibit on alchemists during the reign of Rudolf II, with a view from the top. Admission: adult 50 CZK, child 30 CZK. Open: 10am-6pm Apr-Nov.

This museum is housed in the Order of the Knights of the Cross with the Red Star headquarters, and covers the history of Prague’s famous landmark. Address: www.charlesbridgemuseum.com; Křížovnickénáměstí 3; Admission: adult 150 CZK, discounted 70 CZK. Open: 10am- 8pm May-Sep, to 6pm Oct-Apr.

Charles Bridge crosses its northern tip, and today it is connected to the rest of the city by the street Na Kampě. Because it is separated from the rest of the city, Kampa Island is one of the most tranquil places in Prague. The island is divided into two parts with one section being closest to Charles Bridge and forming a cozy square. The other part is a park dotted with several historical gardens. The island dates back to the 12th century, but for years was subjected to river flooding which constantly changed its shape. However, in 1541, residents began to shore up the island using rubble from burnt-out buildings. The island is separated from Lesser Town by a river channel known as the Čertovka. It gets this name, meaning demon, from the legend that a successful woman who once ran a mill on the island was in cahoots with the devil. The island was mostly deserted until the mid 16th century, with the exception of three watermills. Today, visitors can still see two mill wheels. 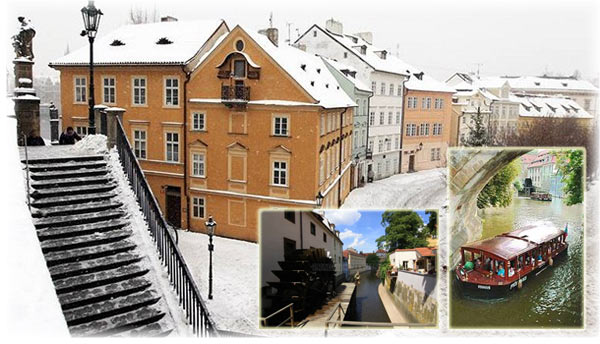 Midday on Charles Bridge. Unless you enjoy being packed with fellow travellers, visit this popular spot sometime other than midday. The crowds start arriving around 10am, especially during summer. Early birds can have the bridge more or less to themselves at sunrise.