Founded by Emperor Charles IV on 7 April 1348, Karolinum (Univerzita Karlova) is the oldest university north of the Alps and still serving its original purpose. Unfortunately only little was preserved of the original building (a beautiful bay window, for example), but the courtyard was rebuilt in Gothic style after 1948. Thousands of German students left the university in 1420 when the reform preacher Jan Hus became a rector. 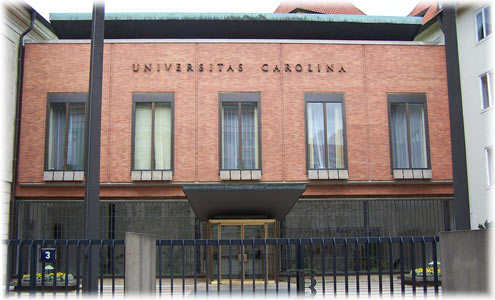 The most striking detail that remains from the original Gothic structure is this oriel window, across from the Estates Theatre, with its many gargoyles and intricately carved fantastical creatures.

Today the Charles University has facilities all over Prague and the Karolinum houses only some medical faculty offices, the University Club and occasional academic ceremonies (ceremonies take place here in the Aula Magna). The gothic bow-window is often used as the University symbol. There is a gallery on the ground-floor. 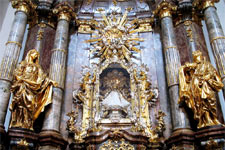 The Church of Our Lady Victorious, built in 1613, has on its central altar a 47cm-tall waxwork figure of the baby Jesus, brought from Spain in 1628. Known as the Infant Jesus of Prague (Pražské Jezulátko), it is said to have protected Prague from the plague and from the destruction of the Thirty Years’ War.