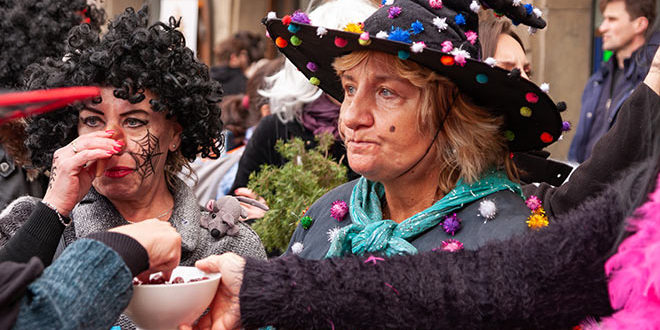 In Prague, at any time of the year, there are some cultural events or festivals going on. Listed below is our list of Prague’s most popular annual events and festivals. Dates and times might vary, so be sure to check in advance with the Prague Tourism Office.

On this public holiday, a half-hour fireworks show starts at 6pm at Letná. For the best views, head toward the river bank. read more

An annual festival of opera, ballet, and classical music which began while the country was under communism in 1972. It usually starts in the first week of January and is held at various venues including Prague’s National Theatre, The Estates Theatre and Rudolfinum.

Beginning in late January, this festival highlights some 30 different European films at various cinemas in the city centre. You may even meet some of the stars, directors and producers (various venues; website)

The local incarnation of Mardi Gras (Masopust is Czech for “meat-fast”) brings everyone out on the streets for a party. The Prague version includes parades featuring elaborate handmade costumes, as well as pig-roasts, theatre performances and family activities. Events take place in various districts of Prague (website).

Fair starting either in late February or early March and running through the end of April.

St Matthew’s Fair, known as Matějská pouť to the locals, is a time-honoured Czech tradition which is a truly entertaining and family-friendly event. The earliest recorded festival began over 410 years ago. There are some 130 attractions on the exhibition grounds, including rollercoasters, houses of horror, carousels, waterfalls, virtual reality machines, cannonballs, a water world and a ferris wheel (Holešovice;  website).

March to April, depending on the Easter holiday dates

At this ancient folk festival, bonfires are lit and effigies burned in a playful ritual celebrating the end of winter and the new birth of spring. These festivals are mostly found in the countryside but events go on at many Prague parks, while the most famous one is on Petřín Hill.

In the middle of May

Join the other 20,000 runners from all around the world on this international marathon, which starts and finishes in the historical centre. The whole Volkswagen Prague Marathon is 42km long (with a seven-hour limit) but you can go for the shorter option, which is the Hervis Prague Half Marathon which is 21km (with a three-hour limit). website; read more

May to early June

For three weeks, this is a famous series of classical music and dance performances in churches, palaces and concert halls, drawing thousands of visitors every year. Enjoy first-class symphonies, operas and chamber music from talented artists (website).

Breweries come from all over the Czech Republic to present their local golden liquid at this, the largest gastronomic event in the Czech Republic. Expect beer-hall seating in big tents, live music and Czech junk food (Letňany Exhibition Center; website).

Mezi ploty (Between the Fences)

This is a music and theatre festival held in the grounds of a psychiatric hospital. Many famous Czech acts and theatre troupes turn out to heighten awareness of mental illness (website).

Last weekend in May

This three-day festival, run by the respected authors of a local restaurant guide, touts Prague’s different cuisines through the offerings of more than 30 of the country’s best restaurants (Royal Garden of Prague Castle; website).

This ten-day festival of theatre and comedy, based on the famous Edinburgh Fringe Festival, brings innovative and experimental performances to intimate, unusual venues around Prague, with an interesting line-up of amateurs and professionals that changes every year (various venues; website).

This international festival of contemporary dance highlights the best of local and visiting international talents. This festival is now one of the most successful in Prague (various venues; website).

Cinema lovers from the world over find their way to the west Bohemian spa town of Karlovy Vary for this Cannes-like version of a film festival (various venues; website).

Inspired by the London BBC Proms, Prague Proms brings together symphony in all its forms. A highlight is the Hollywood Nights event, which shows off music’s role in the making of a film. The festival is affiliated with the Czech National Symphony Orchestra (various venues; website).

This series of exceptional concerts focuses on the styles of music throughout history in the Czech lands; it pairs music with historic venues (various venues; website).

Celebrating the 19C Italian composer Guiseppe Verdi, this month-long festival opens the opera season each year with a run of Verdi’s most beloved operas. The festival provides a chance to see very good productions outside the main opera season (Prague State Opera, website).

Over the course of several weeks, the Rudolfinum hosts a series of concerts in honour of Czech composer Antonín Dvořák. Works by the likes of Mozart, Schubert and Strauss are also included (website).

One of Europe’s top billings, Prague Autumn welcomes conductors from all over the world to play with the Philharmonic and the Prague Symphony Orchestra (Rudlfinum; website).

This festival with a tradition of more than 30 years features everything from jazz greats to big bands. You can see performances by jazz legends from all around the world, with plenty of local stars in between. The festival is held in several venues across Prague but mostly at Lucerna Music Bar (various venues; website).

An impressive collection of award-winning photographs is shown at this free exhibition. Works illustrate the past year’s most moving documentation of global and local events, as well as great artistic achievement in the photographic media (Old Town Hall; website).

People wander around the streets in groups of three dressed as St Nicholas, an angel and a devil, symbolizing confession, reward and punishment. read more

If rowdy and loud is how you like your New Year’s Eve, then come hear the concerts on Wenceslas Square; or go to Old Town Square for live big screens and other performances; watch the spectacular fireworks burst over the river; and join the masses partying in the streets everywhere in Prague. read more