There are large possibilities for excursions from Prague. Some places are better to visit overnight, while many of others are great for just a short half- or full-daytrip.

Kutná Hora, a UNESCO World Heritage site with Ossuary which is almost entirely decorated with human bones, is not to be missed, followed by Karlovy Vary, which is famous for its hot mineral springs; Plzeň and České Budějovice are both centres of the brewing industry, and the wineries of Mělník date back to the reign of Charles IV. Medieval Karlštejn Castle and the surrounding area are stunning in the summer, ringed by well-marked hiking trails. Nearby Křivoklát Castle was also used as a hunting lodge and features numerous cultural exhibits around its grand interior, set in the ravishing countryside. Terezín, a prison camp where Jews were held throughout the Nazi occupation is also a perfect day trip for its proximity. The medieval city Český Krumlov is one of the most popular excursion destinations in the Czech Republic not to be missed.

The Spa Region Of West Bohemia 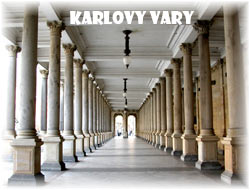 After Prague, the most frequented area of the country is the spa region. Towns like Marienbad (Mariánské Lázně) and Karlsbad (Karlovy Vary) feature curative waters, pleasant park walks and picturesque spa architecture. Lots of people visit for the atmosphere (with fountains and bands), to try the mineral-rich water, to visit the active spas, to utilize the Will pools to ease their ailments, or just to unwind. The oldest is Karlovy Vary, featuring elegant promenades and ‘wedding cake’ architecture, but Mariánské Lázně is arguably more appealing, as it’s quieter and greener. Near to Karlovy Vary, in a Village called ‘Loket’, is a splendid castle on a hilltop.

The region’s biggest city, Plzeň, provides beer tours, but apart from the insightful tour of Urquell brewery, there’s not much else of interest.

The region’s biggest city, Plzeň, provides beer tours but, apart from the insightful tour of Urquell brewery, there’s not much else of interest.

This is an uncovered goldmine in Bohemia, with magical castles and small towns scattered amongst the countryside and touched by the dense forests of the Šumava mountains alongside the border with Austria. The small city of Tábor is pretty and was inhabited by the Taborites in the fifteenth century. Its entwined cobbled pathways and network of tunnels underground are interesting to look round. Písek is also a pleasant town and boasts a footbridge from medieval times, which, in fact, pre-dates the Charles Bridge in Prague. Deeper south, the Třeboňsko area is the swamp-ridden home of several carp lakes based around the compact town of Třeboň, which also dates back to medieval times. Near to this, the bigger town, Jindřichův Hrade, has an intriguing portfolio of architectural designs and a fantastic chateau from the Renaissance period.

The largest city in the area is České Budějovice. As well as the brewery of Budějovický Budvar, it’s got a huge cobblestone square and a great tower where you can survey the fine scenery. A small trip down south brings you to the enchanted town of Český Krumlov, where the backstreets from medieval times run through an S-shaped bend in the Vltava river. All of this is overlooked by a wonderful castle. Due to its position close to the border with Austria, it’s grown to be a popular border-jumping day out (as well as somewhat of a hangout for back-packers), but nothing detracts from its tranquility, particularly at nighttime after the crowds have disappeared.

To the south of Český Krumlov, beyond the delightful town of Rožmberk nad Vltavou, the low Šumava Mountains start. Apart from just vanishing into the dense pine forests, either by bike or canoe (which you can rent) or on foot, the Šumava contains many small, enticing towns, such as Kašperské hory, Klatovy and Prachatice.

There’s not much here, but the attractions that do exist are definitely worth visiting. Less than one hour away from Prague, Mělník is a town with a great castle located up from the merged Labe and Vltava rivers. Further up north, the town of Litoměřice boasts some great Renaissance architecture. Only a small number of kilometres away from this is the former concentration camp of Theresienstadt (Terezín).

Throughout the splendid hilltops of České středohoří, the Labe river flows through a number of tough industrial areas (like Ústí nad Labem) prior to passing down the picturesque, sandstone forest area of Hřensko—ideal for hikes. 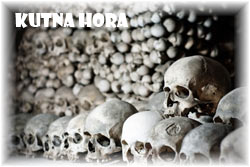 Eastern Bohemia’s shape alters from completely flat in eastern Prague, to quite hilly in Český ráj, to extremely mountainous in the countryside of Krkonoše. Kutná Hora is a quaint medieval mining town in this area, with a wonderful cathedral and a morbid ossuary—a church adorned with thousands of human skeletons—in the close-by Sedlec. Hradec Králové is a town with a pleasant square and a great museum of modern art. Litomyšl is also a town with a beautiful square (that is arcaded) and a chateau that is very extensive.

The countryside is the main attraction, though: Český ráj has luxurious scenery of woods and sand-stone `cities’—strange rock structures that are real fun to negotiate through; Adršpach, towards the east, contains much of the same. The mountains of Krkonoše have the best skiing in the country during the winter months (especially at Pec pod Sněžkou and Špindlerův Mlýn) and excellent summer hikes. 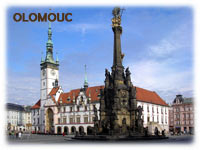 Northern Moravia gets the same bad press as northern Bohemia because of its substantial industrial areas. Nonetheless, Olomouc is a fantastic city with a weaving cobblestone square and enticing gothic cathedral. Northern Moravia possesses some enchanting scenery and distinctive folk centres also: the mountains of Jeseníky close to the border with Poland are quite remote and deep, whereas the Beskydy area, alongside the border with Slovakia, has a diverse heritage of folk tradition. The big Skanzen (open-top folk museum) in Rožnov pod Radhošťem explores the intriguing history of village life in Moravia; the near hillside town of Štramberk has its original wood cottages; and Hukvaldy is a village that has a museum in composer Leoš Janáček’s previous house. Great hiking routes are also offered in the mountains of Beskydy.

Based around the second city of the country, Brno, this area includes a variety of features, from the nice rolling western Czech-Moravian High-lands (Českomoravská vrchovina) to the southern large vineyards and chateaux to the eastern religious sites of importance.

Although Brno can’t touch Prague with regard to the range of historical attractions, it’s definitely worth visiting, with a combination of well-maintained squares, the splendid Cathedral of Saint Peter and Saint Paul, the formidable Špilberk fort that saw action during the invasions by Sweden in the sixteen hundreds and during the Nazi occupation, and an intriguing collection of the remains of important citizens in the Capuchin church which have been mummified. Right outside Brno is the famous battlefield area of Austerlitz (Slavkov to the Czechs), where Napoleon conquered the united Russian and Austrian troops. 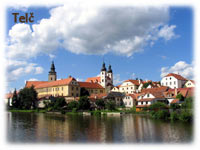 Telč has a lovely square and a cavalcade of Baroque and Renaissance buildings. It is situated in the hig-lands area loosely making up a border with Bohemia. In the south is the Czech Rep’s wine-making centre, located by the border with Austria, with autumn and summer festivals appearing in distinctive towns, such as Mikulov and Znojmo, and lovely chateaux, such as Valtice and Lednice. Towards the east, the culture and landscape moves through to Slovakia. Noteworthy ecclesiastical areas, like Velehrad, play host to significant pilgrimages, whereas Kroměříž is the hometown of a respected archbishop’s gardens and palace.