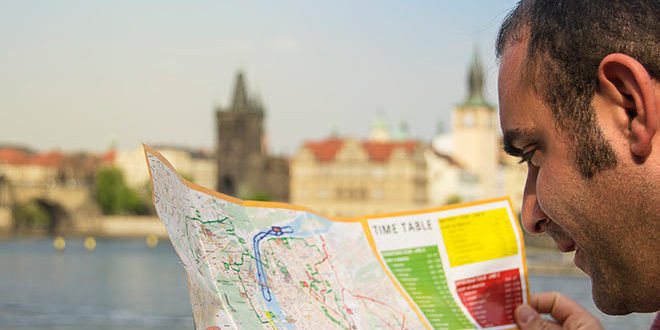 On first look, the fairy-tale city of Prague may seem like an incomprehensible sprawl of winding streets, narrow alleyways and endless churches, but with a little know-how, it really is quite easy to navigate. The best way to get a feel for the city, unsurprisingly, is just to take a walk around the many different neighbourhoods. But if you don’t have time for that, here are some simple facts to get you started.

1. Prague is physically divided in two by the Vltava River, which runs vertically in a relatively straight line. You’ll find a solitary sharp turn and loop in the centre, starting just north of the Jewish Quarter.

2. The city was historically comprised of five independent towns: Hradčany (the Castle Area), Malá Strana (Lesser Town), Staré Město (Old Town), Nové Město (New Town), and Josefov (Jewish Quarter), and these divisions are still relevant today. If you can learn how these relate to one another, and which side of the river each of them are on, the city suddenly becomes a lot easier to navigate.

3. The first area to note is Hradčany, on the west side of the river. The seat of royalty for centuries, the area centres on Prague Castle, which (as it sits on a hilltop overlooking the city) is visible from many points on both sides of the river. The area below Hradčany is Malá Strana, which is dense with ornate Renaissance and Baroque mansions built specially for the 17th- and 18th-century nobility.

4. Immediately on the east of the river, directly connected to Mala Strana by Manes Bridge (one up the river from the famous Charles Bridge) is the Jewish Quarter, which runs along the side of Pařížská street. And just south and inland of this area is the Old Town. Comprised of three main commercial streets – Revoluční to the east, Na Příkopě to the south-east, and Národní Třída to the south – this district’s centre is Staroměstské náměstí (Old Town Square), a former medieval marketplace laced with lovely, pastel-coloured Baroque houses… and one of the most beautiful city squares in Europe.

5. Head beyond the medieval walls of the Old Town to the south or east, and you’ll enter the New Town. Of course, ‘new’ is a bit of a misnomer – this part of Prague was laid out in the 14th century, which only makes it new compared to the Old Town – but this area is home to some of the city’s most visited areas, including Václavské náměstí (Wenceslas Square) and Karlovo náměstí (Charles Square).