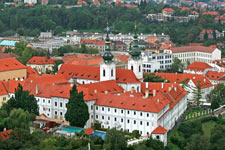 The monastery, which became known as the Strahov monastery (Strahovský klášter), was not much of a success until 1143, when a group of Premonstratensians settled here. The Premonstratensians are a Roman Catholic order of canons founded in 1120 by St. Norbert. They are also known as the Norbertians or White Canons. During communist times, the monastery was closed and many monks were imprisoned. Later after the communist regime collapsed, they returned here in 1990. The monastery area includes the Church of St. Roch, Church of Our Lady of Ascension, where Mozart is said to have played the organ in the church in 1787, Strahov Picture Gallery and the unique Strahov Library. 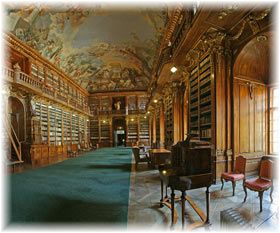 The magnificent library is located in large halls and decorated with Baroque ceiling frescos. It is the largest monastic library in the country with two baroque halls and is more than 800 years old. The library contains more than 130,000 volumes, including 2,500 books published before the year 1500, along with 3,000 manuscripts. The oldest book is the 9th-century Strahov Gospel. Other works include those of famous printers such as Christophe Plantin from Antwerp.

There’s a two-story high Philosophy Hall dating back to 1780 and its entire ceiling is covered with a delightful composition entitled The Spiritual Development of Mankind by Franz Maulbertsch. The lobby outside the hall contains a Cabinet of Curiosities which you simply must see.

This corridor takes you to Theology Hall (with a curved ceiling in Baroque stucco work) dating from 1679, built by Giovanni Orsi. Theology Hall has walls lined with elaborately carved bookcases, stacked with precious volumes and manuscripts. Write your name on a grain of rice at the Miniature Museum. 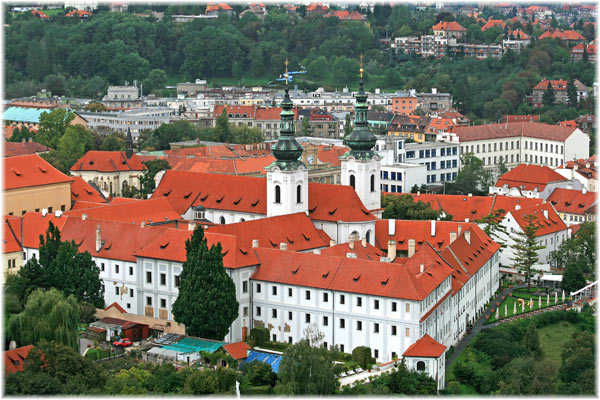