Standing tall and daunting on a steep rock overhanging Prague’s right bank, Vyšehrad’s Basilica of St Peter and St Paul is an imposing sight, one to rival Prague Castle on the other side of the Vltava.

It’s no coincidence that Vyšehrad translates into ‘Castle on the heights’. It is thought that the site of Vyšehrad may have been that of the first-ever settlement of what came to be known as Prague. But, boasting its Basilica, a small amphitheatre and vineyards, perhaps Vyšehrad’s most stunning feature is its cemetery; the final resting place of many great Czechs, including Karel Čapek, Emmy Destinn, Alphonse Mucha and Antonín Dvořák.

Stopping-off points: Relax in the park next to the Basilica if the weather’s fine. If not, you’ll find warming cafés and bars dotted around the area.

The below-listed tour can be walked on your own (self-guided tour), or we can arrange for you a professional English-speaking guide. The tour guide can even tailor this walk to your special needs; for example, recommend a place to stop for lunch, including a river cruise or tram ride if you are tired of walking, etc. The guide can pick you up at your hotel, or you can arrange to meet anywhere in the city. Please email us your details for a price quote.

1.  V Pevnosti. Alighting at Vyšehrad metro C, find the exit for the Congress Centre Prague, walk up the steps and continue straight ahead, keeping the deep Nusle Valley to your right. Head down the incline and straight ahead into Na Bučance. Cross the road, turn right at the end, and you’re now on V Pevnosti.  There is no better way to enter the old Vyšehrad fortress than this because it takes you via a series of old entrances, the first of which is the 17th-century Tábor Gate. As you pass under this, you might consider stopping at the tourist information centre, where you can find further literature on the area, not to mention a roaring log fire during the winter months. Beyond the Tábor Gate, too, can be found the ruins of Charles IV’s 14th-century fortifications. A little further up, you’ll reach the remains of the Gothic gate, Špička, and beyond that, the marvellous Leopold Gate, which is guarded by a pair of lions and a defiant-looking eagle. At full moon, the gate is haunted by French soldiers, who briefly occupied Prague in 1741.

2. K rotundě to Soběslavova Street. On your right after the Leopold Gate is the 11th century St. Martin Rotunda, the oldest extant building in Vyšehrad. Unfortunately, this is rarely open to the public, and more’s a pity because architects have recently uncovered a secret underground floor here. Veering left into K rotundě, you’ll about be able to make out – behind its very high walls – the New Deanery, decorated with a coat of arms bearing the crossed keys emblem of the Vyšehrad Capitulary.

Turn left down Soběslavova to see the excavations of the foundations of the Basilica of St Lawrence, built under the auspices of Bohemia’s first king, Vratislav II. The remains of this basilica were discovered in 1884 while workers were digging a new cesspit. 20 metres on, turn right, onto the fortified walls, where a staggering rooftop panorama greets you.

3.  Vyšehrad Rock. Of course, the main reason Vyšehrad is positioned where it was originally for defence purposes; its defiant rock wall running all the way down to the Vltava. According to legend, Vyšehrad Rock is said to hold the tomb of a talking horse named Šemík, who leapt over the fortifications, then down the cliff, with his imprisoned master on his back. Exhausted, Šemík died soon after, his final wish to his master that he be buried here. On the Rock’s summit are the Gothic ruins of ‘Libuše’s Baths’, a defence outpost for the medieval castle.

4.  Vyšehrad Park. Nestled among lofty trees, a sense of peace reigns through Vyšehrad Park. Picnickers congregate here during the summer, and when it’s cold, a handful of cafes and bars provide necessary mugs of mulled wine, or ‘Svařák’ as it’s known here. The huge statues you see are the work of Josef Myslbek and depict various Czech legends, such as Přemysl the Ploughman, the mythical ancestor of the Přemyslid dynasty. In fact, the statues used to inhabit Palacký Bridge but were damaged during World War, and the following restoration placed here instead. Some Czechs believe this was in error rather than planned.  The park also has a bottomless well, once a vital water supply for the castle, especially during sieges.

Inside (there is a small charge for venturing thus), Art Nouveau wall paintings dominate the Church, although the most valuable is a 14th-century depiction of the Virgin Mary. Some say this was painted by no other than Luke the Evangelist himself.

Listen out for the bells which peel from the Basilica’s spires on the hour. You might recognise one of the Czech classics chimed, including Bedřich Smetana’s ‘Má vlast’ (‘My Fatherland’).

6.  Vyšehrad Cemetery and the Pantheon. It is particularly fitting that this composition is to be heard floating across Vyšehrad, as the Basilica’s cemetery houses the grave of Smetana, along with many of his contemporaries. Founded in 1869, this graveyard is heavily influenced by the Art Nouveau fashion of the time, and as such, you might find yourself exploring for hours; many of the decadent tombs and memorials are works of art in their own right. The cemetery’s most famous part is its Pantheon or “Slavin”, designed by Antonin Wiehl. As you enter, on your right is a list of the cemetery’s most famous residents, informing you exactly where to locate their grave.

Leave the cemetery the way you entered and return down K rotundě. To your left is the strange formation that is the Devil’s Column, named so because it was said to have been left here by the Devil after he lost a wager with one of Vyšehrad’s priests. Turn left and slope downhill to Cihelná Gate, which houses a small museum containing six original statues from Charles Bridge. After this, go down Vratislavova and find the Výtoň tram stop on the Vltava Embankment. 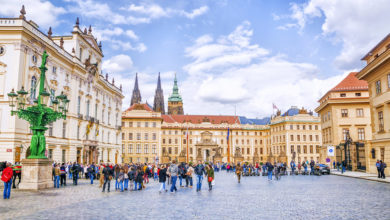