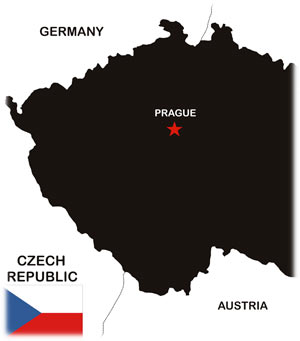 Situated at the centre of Europe — maybe a bit farther northwards and westwards than many people believe — Prague is positioned on the River Vltava’s banks. This site was selected for both its’ tactical benefits and because of its’ serenity. The famous old city is nestled in a ‘bowl’ of rolling hills.

Not frequented by tourists very often until 1989, when the communist regime fell, these days Prague is among the most visited tourist hotspots throughout Europe.

A few destinations still possess the ability to make even a very jaded tourist stop for reflection, where a mere collection of galleries or museums is not enough to do it justice. Prague has to count as one of these destinations. Never ruined by war, the 1000 year history of the city is ingrained into its’ very being. Its’ unparalleled sights and distinctive personality have evolved as it has developed into one of the main capitals of Europe. It’s been Bohemia’s Castle District capital for hundreds of years. Throughout the Middle Ages, Prague gained importance as Charles the Fourths’ capital. Charles the Fourth ruled most of Western Europe and was a Holy Roman Emperor. During the late sixteenth and early seventeenth centuries, Prague was the location for the Habsburg Courts, and, in 1918, it was adopted as the capital for the newly independent country – Czechoslovakia. A Communist regime took control during 1948 and governed the city; however, they were deposed in 1989 by the `Velvet Revolution, based in Prague. In 1992, once the Slovaks and the Czechs went their separate ways, Prague was declared the capital of the newly formed Czech Republic.

Prague has always been and still is a city of contradictions. It is renowned for its’ outstanding works of art, both historically and in the present day — in paintings, sculptures, literature, music, design and architecture — however, it is known for its’ wholesome food, beer and commercial tourist industry. Also, Prague is a city of revolt and demonstration, accustomed to asserting its’ common beliefs. From the Hussites of the fifteenth century, who battled against the Catholic Church’s hegemony, to the fight against the rule of communism in 1968 & (more successfully), in 1989.

Nonetheless, this city has also happily welcomed consumerism, evident in the elaborate new shopping centres built. It sometimes appears to be modelling its’ identity on the New York and London global shopping scene. However, this is all part of the appeal of Prague; there is probably something to please everyone, particularly if you can see just that little bit beyond the usual tourist haunts of the Old Town Square and Castle. A great way to sample Prague is to take a stroll through the cobblestoned streets whilst taking in the wonderful architecture, buildings and churches which will characterise any route. Actually, there are more than eight hundred and sixty-six hectares of land mentioned on the Natural Heritage and World Culture Register of UNESCO. The city’s history actually extended 1000’s years back and was initially set up by the Celts in (approximately) 200 BC. Consequently, tourists can visit sights that range from the Holy Roman Empire times to the communist era.

Furthermore, there are also lots of eateries and cultural happenings to participate in. Tourists can enjoy operas and classical concerts or get involved in the club scene. Both dinners and lunches are served at reasonably competitive prices, and do not forget to sample the renowned Czech beer to compliment your meal.

The architectural tapestry of Prague spans virtually every main European genre, with fine instances of Gothic, Romanesque, Baroque, Renaissance, Modernist, and Art Nouveau incorporated throughout the city. Each façade displays the work of a master painter or sculptor, and behind these, many of the most well known European musicians have worked, including Dvořák, Smetana and Mozart. Moreover, part of the appeal of these works is the religious and political undertones.

First place has to be awarded to Prague Castle, the hub of aristocratic power during the Middle Ages. It is located on top of a lowered ridge, with great city views. Royal sponsorship allowed a court to be built, which attracted many wealthy and powerful people. These people spent a fortune constructing summer palaces and lavish mansions using the best craftsmen of the era. The clergy also had a role, but the circumstances were complex: During this time, Bohemia was a large battleground between church reformers and Catholic partisans. The innumerable splendid churches, cathedrals, convents, monasteries and chapels constructed here reflect the intensity of the conflict — and the triumph, eventually, of the Catholics. This is what has given Prague the nickname: `the city of 100 spires’.

These phases of construction and re-construction have developed 1 of the most stunning cityscapes in Europe. It is undeniable that, on a warm summer’s day, Prague appears picturesque. However, it can be just as magical when set against autumn’s copper tints or when covered by the crisp snow of winter. At night-time, it is equally impressive, with the River Vltava reflections and the buildings illuminated by the distinctive glow of the street lights.

Hundreds of years of the first-rate theatre, art and music have produced a sophisticated and cultured society: Prague citizens like their galleries and theatres to the same extent as tourists, basking in the artistic gems of the Habsburg era and the illustrious artistic innovations which characterised the developing nationalism throughout the nineteenth century. Concert ticket prices and ticket prices for other city performances are still quite competitive, compared with other countries, and enable people (i.e. tourists and locals) from every walk of life to participate in the rich cultural scene of Prague.

Nonetheless, highbrow artistic critique is not always dominant: the Czech Republic is among the leading producers of beer in the world, and individuals are also very keen on home drinking in the innumerable beer halls of the city or visiting smoky jazz clubs or rock bars. The café culture, which influenced lots of the city’s artists, from Kundera to Kafka, is now essentially consigned to history. Thus, you would be far more likely to witness people eating an ice lolly, getting some fresh air on one of the numerous parkland stretches, or driving around town in a Czech produced Škoda car than debating philosophy.

Since 1989, lots of things have changed for both Prague and its’ residents. Young people have grown up enjoying the kind of freedom that youngsters in the western world have long enjoyed. Indeed, in some respects, Prague does not differ too much from many other big European cities. The city is now packed with overseas clothing store chains, which sell identical fashions in Paris, Milan and London. Virtually everyone owns a cell phone, sales of CDs are dominated by all the same bands you hear about elsewhere, and there’s a well-developed Czech rock and pop scene.

The economy in the Czech Republic greatly benefited from the increase in tourist numbers following the Velvet Revolution. Consequently, lots of historical buildings have been massively renovated. Nonetheless, some of these renovations have been insensitive and have failed to preserve the building’s authenticity. As a result, some of the city is at risk of transforming into a Central Europe style theme park. It is undoubtedly hard to circumvent your fellow tourists, whether they are honeymooning couples, holding hands and walking through the narrow streets, students on budget European tours, or big groups marching in force around the city square.

Notwithstanding this, Prague is still among the most picturesque and intriguing places to visit in Europe. Quiet corners, or even entire districts, can be discovered by anyone willing to put the effort in. The fact that the city can fulfil the varied wants of all these cosmopolitan groups of individuals is a testament to Prague’s ability to cling to its’ diverse treasures.