Prague, until around 1800, just consisted of 4 separate towns that had 4 town squares, which were all divided by defended walls. Every town had distinctive qualities that originated from the personalities of the individuals who settled in them initially. These days, most of the charm of Prague endures within the unique spirit of all of its’ towns. 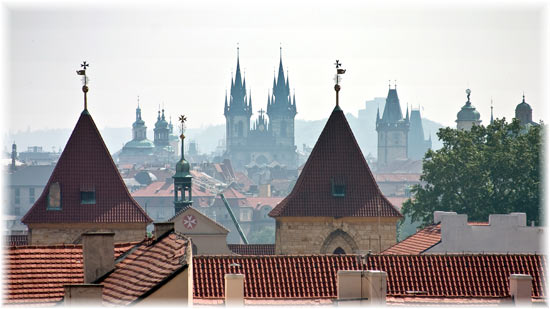 The ruling classes had occupied Castle Hill ever since the 9th century when the 1st castle was constructed upon the promontory overlooking the ford across the River Vltava. Once the Czechs were introduced to Christianity, this hill-top—aligned alongside an east/west axis—served as an ideal location for worship and, subsequently, a cathedral (which tradition stated had to be constructed with the altar facing eastwards). Lastly, the nobles constructed their representative palaces close to the castle to influence the King in competition with the Church. Visitors even feel like passing through this area in an elaborate horse-drawn carriage today. The Castle Quarter—which hosts the presidential and foreign offices—features splendid buildings and high art, a few pubs and a bit of commerce. read more

This town of fine Baroque gardens and palaces arose in the aftermath of the merchant settlement, which burnt down during the 1540s. The European and Czech nobles who moved here were very proud of their grand garden designs. During the 1990s, following decades of neglect, these gardens were painstakingly restored. Whilst some are only open to the relatives of the former nobles—such as the German, Polish and American Embassies and the Czech Parliament—several are open to tourists. read more

The Old Town is connected to the Little Quarter via the Charles Bridge. A booming town ever since the tenth century, this locale has been a bustling commercial centre for a long time—packed with guilds, merchants and Jan Hus supporters. Jan Hus was a Church reformer who lobbied for a Czech style of Catholicism. The town walls can be traced on a modern road map (one remnant of the wall system which made up a fortified ring is the Powder Tower, and the river formed the other half of this). The boggy area nearest to the curve—the least attractive and thus delegated to the Jews—turned into a ghetto (today called the Jewish Quarter or Josefov). read more

The Old Town is surrounded by the New Town—forming a line from one riverbank to another—and this is enclosed within the outer wall of Prague. During the fourteenth century, the King set this town up and tripled the area that Prague would occupy. Wenceslas Square used to be the horse market for this bustling working-class locale. The Old Town, even today, is segregated from the New Town by a “moat” (which refers to a street named Na Příkopě). Once you pass through busy Na Příkopě, you leave behind the souvenir and glass shops and find yourself in a town of fancy shops and malls, catering to both tourists and locals. read more 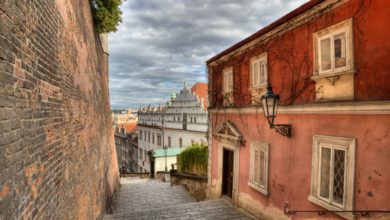