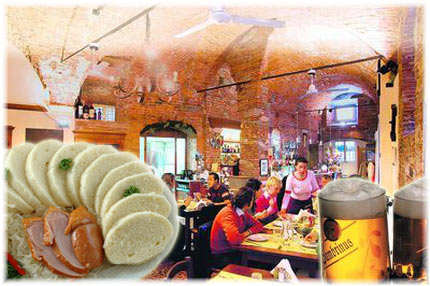 Vegetarians beware!  Prague is not going to be the best city for you.  However, for those who love meat, then it is going to be a perfect spot. In fact, traditional Czech cuisine consists of meat-based dishes, including pork, cabbage and dumplings.  Czech food itself is normally the cheapest and hearty to eat if you are on a budget.

A lot of the food in Prague will be very similar to what one would find in Austria and Germany. Most of the food includes fried or roasted beef or pork and sometimes fish and other game. Many times the meat is served with dumplings, potatoes, rice and a sauce. While not everyone might enjoy these dishes, they are all very filling.

Visitors can also find numerous spots with international cuisine such as Chinese, Korean, Cantonese, Italian, Japanese, Balkan and American.  However, there is not much fast food in Prague, although pizza is becoming more and more popular.

Most of the food found in Prague is flavorful but not necessarily full of spices. Probably, the most common dish consists of dumplings and sauerkraut. This dish is nicely balanced between the saltiness of the meat and the sourness of the sauerkraut. Another popular dish consists of pot roast covered in a creamy vegetable sauce and cranberries. For those with a sweet tooth, you will enjoy fruit dumplings, strudel and pancakes.

Some portions of Czech cuisine have been imported from other countries.  One of the most popular dishes came via Vienna and includes breaded or fried chicken or pork patties.  From Hungary came goulash, which is meat in gravy with bread dumplings.

If you are looking for a fresh salad, you have come to the wrong place, and even vegetables can be hard to come by.  However, almost every menu will feature a small bowl filled with chopped bell peppers, tomatoes and cucumbers in sweet vinegar and covered with salty cheese.

If you are looking for something to grab and go, then a garlic-seasoned fried potato pancake is a local favourite.  Fried cheese is also a popular snack to grab on the go.

Whatever you decide to eat for lunch or dinner, most meals go very well with a traditional Czech beer.  Some of the best selling and most popular beers are Pilsner Urquell, Gambrinus and Prague Staropramen.  There are also popular wines and spirits, including Becherovka, Borovicka and Silvovice.  Water is not provided in restaurants but is available upon request.

The situation for vegetarians in Prague is getting better every year, as new vegan restaurants are popping up and fresh vegetables are available throughout the year. Most restaurants offer vegetarian and vegan options. It is good to know that even when a dish is described as meatless, it’s always worth double-checking. Vegetarians should particularly beware of menu sections called ‘bez masa’ as, whilst the literal translation of this word is ‘without meat’, its actual meaning is that meat is not the main ingredient in the dishes listed. For more information see the section for vegetarian restaurants in Prague.

Prague’s Chef-parade Culinary School puts the fun into cooking. Learn more about local customs and Czech food via these Cooking Courses that are specially designed for tourists. A practical cooking lesson in English will give you the chance to cook alongside the Chef and experience the delights of local gastronomy. You can tailor the lessons to your likes/dislikes. Opening Times: 08:30 to 17:30. Website: www.chefparade.cz/en/

If you are on the go early, then the best bet for food is to stop by a bakery or café and enjoy breakfast for about 80 CZK.

Lunches are available from 11:30 am until 3:00 pm.  If you are looking to save some money, the cheapest meals are available in pubs where food plus a drink will run about 100 CZK.  Other cheap dishes can be located in pizzerias and Chinese takeaways.  Many restaurants are not open for lunch, and those which generally serve set meals.

Gourmets and lovers of fine dining will appreciate that the number of top-quality restaurants in Prague is constantly growing. Two Prague restaurants Sansho and Monastery have recently acquired the label of BiB Gourmand. They will complement restaurants SaSazu, Le Terroir, Aromi and Divins which managed to retain the status awarded to them in 2011.

If you have an apartment in Prague, or would otherwise like to do some food shopping of your own, be sure to visit the potraviny, otherwise known as the grocery store.  When shopping, be sure to pick up some staples including, ham, a bowl of soup, and fried garlic bread.

If you plan a meal and want to serve it the traditional Czech way, then most meals begin with a soup such as garlic soup, potato soup, dill soup made with sour milk or sauerkraut soup. Tip: Try the Pork knuckle, and you won’t go far wrong.

The desserts served in Prague are usually heavy and can be fat-filled because of the butter and whipped cream used in the recipes.  Some of the more popular dishes include apple strudel, crepes stuffed with strawberries, honey cake and ice cream sundae.

In Prague, be aware that toasting is a widespread occurrence.  The proper way to do so is to look into the other person’s eyes and say Na zdravi, which means your health.  Also, be sure to say dobrou chut, which means bon appétit before starting to eat.  In addition, it is considered to be good manners for the man to enter a restaurant before a woman.  This is a little different from western countries where the man usually allows the woman to enter first.  However, the thinking is that if the man enters first, then the woman is not eyeballed by the men already inside, and the man can make a path to the table.

If you are in a bar and looking for a drink, put a coaster down in front of you so the server can place a mug there.  And when you finish one beer, never pour the dregs of one into the fresh beer you have just received.

Tips can also be left on the table after you have paid the bill.

If you are a smoker, be sure to read the signs on the outside of the restaurant.  Since 2010, all pubs and restaurants must display a sign saying whether or not smoking is allowed, prohibited or mixed with areas for smokers and nonsmokers.

In Prague, there is now a movement toward slightly healthier meals.  While the population is not giving up their traditional heavy meals, more vegetarian restaurants are opening up as residents are trying to become slightly healthier. 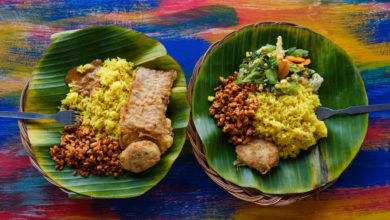 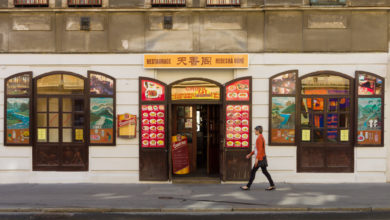 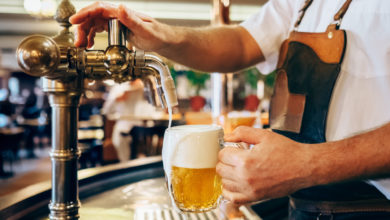 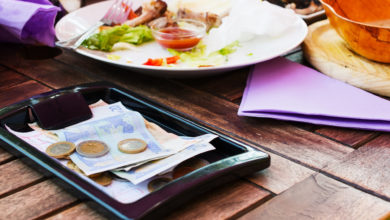 How to Tip in the Czech Republic and Other Countries